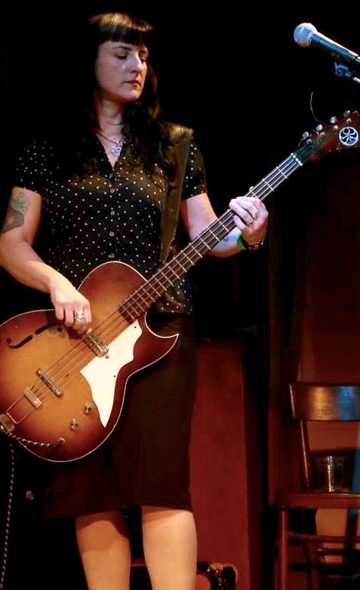 Daria can hold down electric bass duties in just about any situation. She has toured and recorded with avant-rockers God Is My Co-Pilot, pop-noir sextet Melomane, alt-country goofballs The Jack Grace Band, and currently plays bass with singer/songwriter Sasha Dobson. She's also a self-taught ukulele player who has been playing baritone and soprano since about 1998, when she first caught the uke bug. Since then she has played uke in various groups including the Moonlighters and Kings County Queens, and now leads her own uke-centric band, The Pre-War Ponies.

1. I can't remember what the first album was, but the first 45 I ever bought with my own money was "Come On Eileen" by Dexy's Midnight Runners. A victim of the times, I suppose!

2. My folks took me to my first concert at Tanglewood when I was about 3. I don't remember the music - it was probably something classical - but strangely, I remember exactly what I wore! Later on I think the first concert I went to of my own volition was Duran Duran at Maple Leaf Stadium in Toronto.

3. I don't think I ever "wanted" to become a musician. It's something that happened while I wasn't paying attention. ; ) Seriously though, I was an art school drop out who had a series of crappy jobs and played in bands for fun. One day I thought to myself, "Huh, I've been doing this for 10 years, maybe this IS what I'll be when I grow up!"

4. I played viola starting in 4th grade, clarinet (badly!) for one year in 5th grade, and have been singing for as long as I can remember. A bit of a late bloomer to rock music, I didn't pick up the bass till I was 19, and the baritone ukulele came later at around 27.

5. I was in various school related concerts and stuff from about 5th grade on. All city Orchestra when I lived in Toronto, the madrigal/show choir in high school in CT, so I think I performed everything from Bach to Gershwin to the Beach Boys and back.

6. My first band was called Radio One. It was all original pop-punky stuff. Our first gig was a CBGBs Sunday matinee and my parents came. I'm hoping I still have a copy of our demo tape somewhere...

7. The best thing about playing music is carrying heavy gear everywhere you go. Just kidding! It's those magical times when you're in the moment and truly feeling connected to those around you, players and audience (if any!)