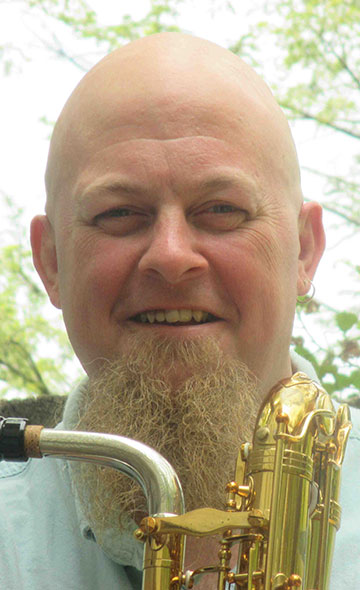 Brad was born and raised in North Carolina and is widely considered one of the pre-eminent concert baritone Saxophonist of his generation.

An active performer in many genres of music, he is currently a member of David Sanford's Pittsburgh Collective and the Jeff Fairbanks Project Hansori Big Band.

From 1988 to 2004, Brad was the baritone Saxophonist in the New Century Saxophone Quartet. New Century was the first saxophone quartet to win the prestigious Concert Artist Guild International Competition at Merkin Hall in 1992. Brad performed extensively with New Century throughout the United States, Europe, and Asia. Some highlights include Weill Recital Hall and Stern Auditorium at Carnegie Hall; a Command Performance for President Bill Clinton at The White House in 1993; the 1996 Presidential Inauguration of Bill Clinton. Brad appears on the first 6 recordings of New Century Saxophone Quartet on the Channel Classics label.

As a teacher, Brad has maintained a private teaching studio beginning in 1989 and was the Saxophone Instructor at Davidson College in Davidson, North Carolina from 1996-1999. He has been a Teaching Artist for a variety of organizations in and around New York City including: ArtsGenesis, The Educational Alliance, The Orchestra of St. Luke's, The Chamber Music Society of Lincoln Center, Plays for Living, and Education Through Music.

As a composer, Brad writes extensively for Diametric Ensemble, a multi-genre chamber music ensemble he founded in 2003. His music and arrangements are published by ALRY Publications. He lives in Beacon, NY with his wife Twinkle and son Ezra.